In northern Canada and Alaska there is small culture of Native peoples who told legends and myths about creatures of the North. These are the Inuit people, and they have many legends about bears, Nanuk in particular. In Inuit mythology, Nanuk/Nanook (the Polar Bear) was the master of bears, meaning he decided if hunters deserved success in finding and hunting bears and punished violations of taboos. The word was popularized by Nanook of the North, the first feature-length documentary. 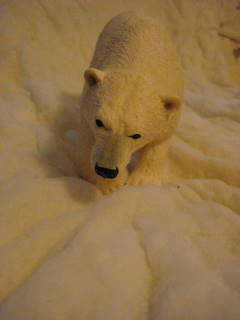 Nanuk was known as the Bear God, He was a great Polar Bear, and the Inuit hunters would worship this great bear because they believed that he decided if the Hunters would be successful or not that day. “In the past, the Inuit ate polar bear meat and used the fur to make warm trousers for men and kamiks (soft boots) for women. Respect was given to Nanuk when a Bear was killed by the hunter hanging the bear’s hide in a special section of his igloo and it would stay there for a few days. They would also offer the bear’s spirit weapons and other hunting tools to the bear if it was a male. If the bear was female however, it would be offered needle cases, scrapers used to scrape the fat off of the hides, and knives. “Native people believed that polar bears allowed themselves to be killed in order to obtain the souls of the tools (tatkoit), which they would take with them into the hereafter. Legend says that if a dead polar bear was treated properly by the hunter, it would share the good news with other bears so they would be eager to be killed by him. Bears would stay away from hunters who failed to pay respect. 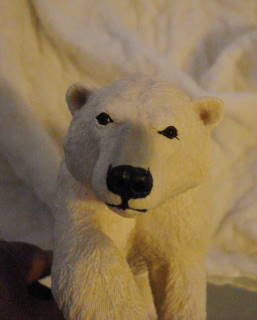 Nanuck was found undernourished and sick at a traveling circus.  He was rescued by Dr. Weeks and the Johnston Zoo.  He is now happy and healthy and a great attraction to the zoo. 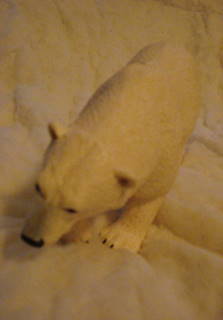 The polar bear or the sea/ice bear are the world's largest land predators.  They can be found in the Arctic, the U.S. (Alaska), Canada, Russia, Denmark (Greenland), and Norway.  Each of these countries either banned hunting or established rules for how many polar bears could be hunted within its own boundaries. These rules help keep polar bear populations stable. Today, 25,000 to 40,000 polar bears roam the Arctic

Despite what we think, a polar bear's fur is not white.  Each hair is clear hollow tube.  Polar bears look white because each hollow hair reflects the light. On sunny days, it traps the sun's infrared heat and keeps the bear warm at 98 degrees F (when they're resting).
Polar bear fur is oily and water repellent. The hairs don't mat when wet, allowing the polar bears to easily shake free of water and any ice that may form after swimming. 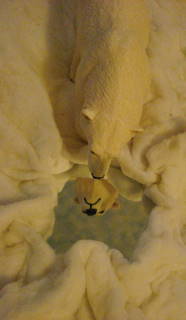 Polar bears have wide front paws with slightly webbed toes that help them swim.  They paddle with their front feet and steer with their hind feet.  Paw pads with rough surfaces help prevent polar bears from slipping up on the ice.
Polar bears have been known to swim 100 miles (161 kilometers) at a stretch. 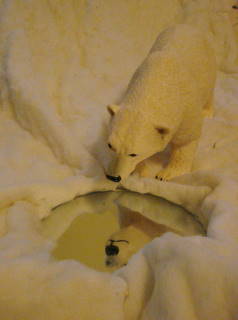 Polar bears primarily eat seals. They often rest silently at a seal’s breathing hole in the ice, waiting for a seal in the water to surface. Once the seal comes up, the bear will spring and sink its jagged teeth into the seal’s head.
Sometimes the polar bear stalks its prey. It may see a seal lying near its breathing hole and slowly move toward it, then charge it, biting its head or grabbing it with its massive claws. A polar bear may also hunt by swimming beneath the ice. 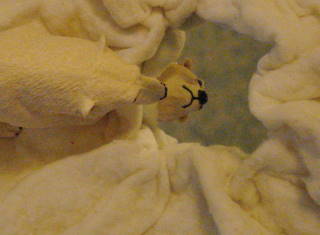 Around the age of four or five the female polar bear can start having babies. They usually only have two cubs and they have these babies in a cave they've dug in a large snow drift.  They stay there over winter and come out in spring with the babies.
The babies are much smaller than human babies when they're born.  They are the size of a rat and weigh little more than a pound.  They can grow to full man size in a year if they have lots of food. 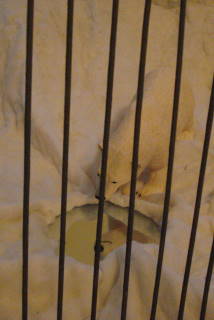 Humans are the polar bears only predator.  Baby polar bears often starve.  In fact, 70 percent do not live to their third birthday.  Sometimes seals are hard to find, especially in the summer when the ice has melted.  All across the Arctic, man is moving in to mine oil and coal and there is less space for the polar bear to live.  Oil spills can be very dangerous.  A bear with oil on its coat cannot regulate its body temperature properly.  If the bear eats the oil while grooming it could die.
Man made pollution is also a cause of death.  At each stage of the food chain, pollutants get more concentrated.  By the end when the polar bear eats the seal and it could be lethal.

So that is something to think about!

Thanks for the info. Who knew? Great pictures, too!

I especially enjoyed the photo of Nanook looking at his reflection. Thanks for all the interesting information about polar bears.

Hello from Spain: I like to know the history of polar bears. Nice pictures. I've posted an entry with the jersey so nice that you sent me. Keep in touch

I'm always a fan of your educational animal posts!

Loved the last picture! It was so creative!Thanks

Thanks for your comments Vanessa, limbe dolls, Marta, Muff, Saria and Barbiecafe!

Vanessa, Sometimes I find animal at the thrift store too. I thought he might be nice for the zoo. The next day on the Nature Plant what animal did they talk about...You guessed it...Polar Bears! So I worked it in!

limbe doll, I think Nanuck thought he was rest silently at a seal’s breathing hole in the ice, waiting for a seal in the water to surface.
Suprise seal, it's Nanuck!

Marta, You doll looks lovely in the sweater. I didn't make the sweater, I purchased them. I glad you and your doll like it!

Muff, I know that they might not be everyone's cup of tea but I love sharing the things that I learn!

Barbiecafe, I had worked on the zoo for another story that I will do in the future but this gave me a chance to use it. I love the scale of the toy bear. It is almost Ken size!

This is really cool!!
Very educational too :)
Love the info about their fur being transparent never heard that. Nature is a wonderful thing ^_^