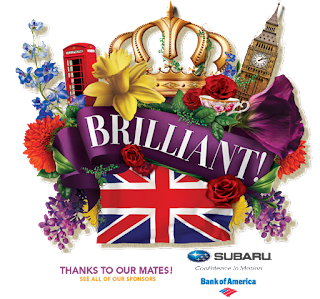 It is that time again!  That is right, it is Phila. International Flower Show time!  I am off from my new job until March the 11th (I arranged that when I was hired) and I will not be blogging from today until the 11th of March also.  The show is a day longer.  So it is now includes two weekends.  This is good for marketing the show!

Notice I said not blogging!  I will use the fact that I will have a little free time to read your blogs and catch up!  I hope to see some of you at the show.  If you are coming, please let me know and maybe we can meet.

Oh, just one thing.   I might have not noticed before but PayPal charges for their shipping labels. It seem that they try to get you coming and going!  I will have to find another way to ship.

Thanks for looking!
XOXO
Ms. Leo 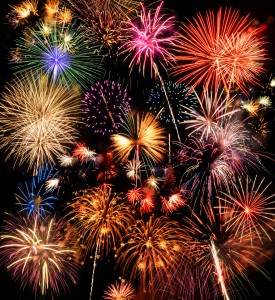 Great News!  I got a new job!  I am still settling into my new job and the work routine.  I haven't had as much time to post or to comment but I have had a little more cash!   I have a few things to pay off and pay down and then I will work on my WISH LIST! 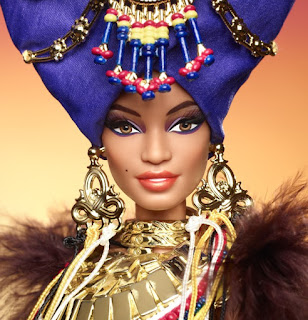 So, I came home to the new Barbie catalog.  The new Tribal Beauty Barbie caught my eye.  I thought she was a new head but it is just one that I don't own yet!  I learned she is the Pazette head sculpt of 2012 that Stephen Burrows did last year. 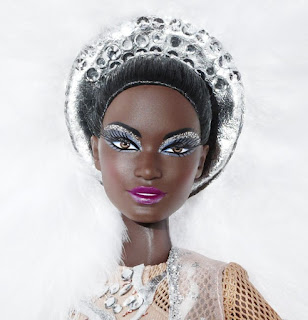 Mattel must have heard my complaints because they now list the head sculpt, body type, if the clothing is sewn on and if the lashes are rooted.  Now she could be  bald as a baby's bottom under that hat so I will depend on you other collectors to show me what is under the headdress.


High on my list is a FR Darius.  There are a few out there so I will have to decide which one. 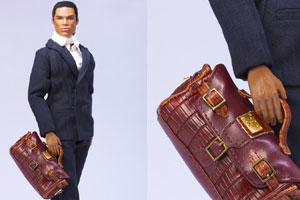 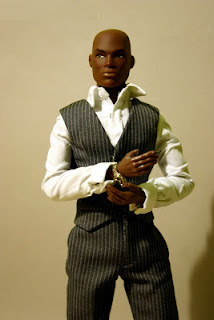 Next on my list is a General Colin Powell.  My hubby to the one I purchase years ago.  Somehow he thought I got it for him.  So I just let it be. 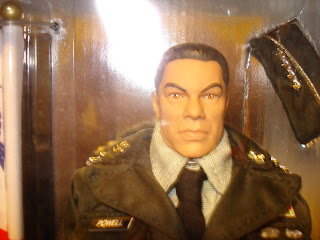 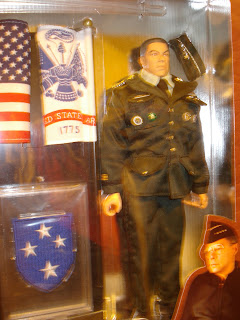 I have four Power Team bodies with the large hands I have to replace.  I will work on more AA hands later.

After this, I will make a permanent display area for my dolls that I keep in boxes.  I don't have that many, so I am thinking I only need a shelf or two.  Even though I am not an Ikea fan I think it will mean a trip to Ikea!  I can count on hubby going along for that because he just loves that place!

After the display dolls are taken care of comes the big project!  The dolls that I play with (of which there are many) will need and organized accessible home.  They days of digging in boxes for lose dolls will be over.  Someone said if you really love something, you treat it with respect.  So that they will get!

Next will be an area where I can take pictures.  Right now it is the ironing board.  But I think I need a better setup.  That is when I will purchase lights.

Then will be the hunt for the dark tone FR bodies and dolls.  They are on the list after lights because those items will need good light.  I couldn't take the photo below with the setup I have. 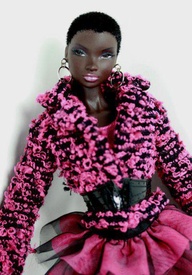 Two other things that will be needed but not on the list because they will be used for more that dolls are a new camera and computer.

OK,
Thanks for Looking!

Fat Tuesday Is Almost Over!

Hey guys, Fat Tuesday is almost over! I hope you
all made a great day of it! I had a pretty good day of
indulgence!

This young lady here is Tootsie! She is the only doll
my husband has ever purchased for me! He got her
while making a side trip to New Orleans while
at a base in Shreveport.

Not the best picture but it is an older picture! 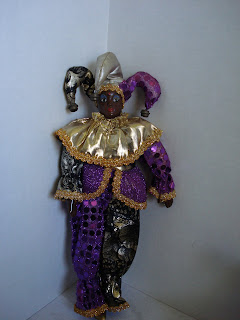 Here she is ready for Mardi Gras! 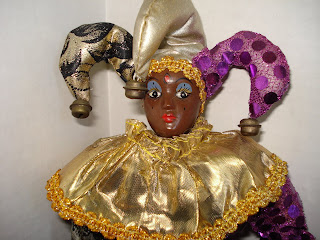 She has a porcelain head along with her arms and
legs. Her body is stuffed. She is only only porcelain
doll I own. 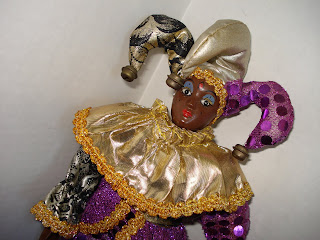 Tootsie: You got to show me your steps to get some beads! 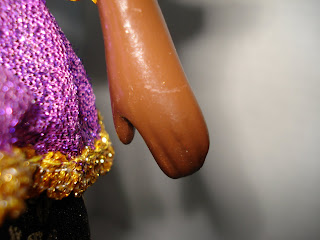 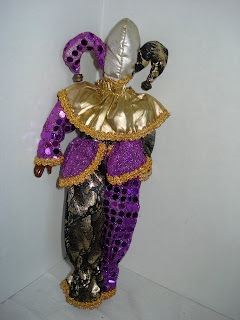 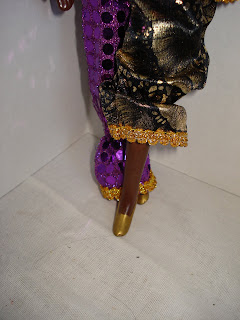 OK! Thanks For Looking.

One last time until next year: Laissez

When I saw that there were AA action figures in Big Lot's, I had to get some even if it means PB&;J for lunch for a while.  There were a few there but only four that I didn't already have.  So here are the guys I purchase while there.

I got these two 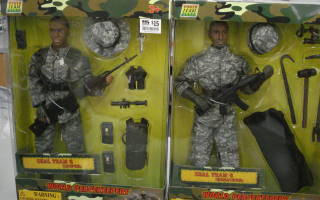 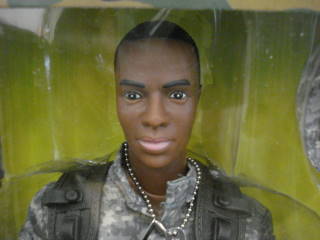 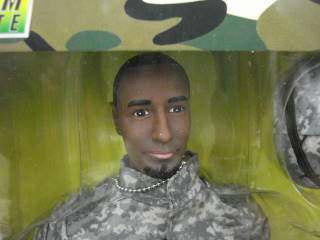 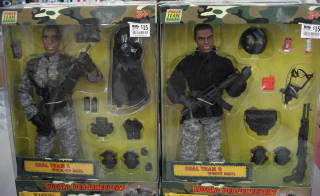 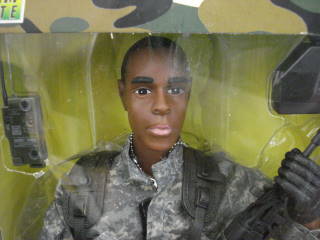 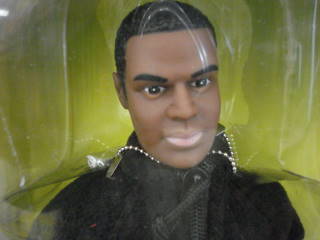 Let's look at them out of the box,

I originally thought these guys were the same. As you can tell form the picture they are different. 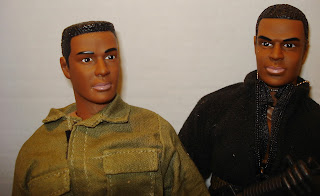 When I realized they were different, I knew I needed to have them both.  The one on the left is older and I have had him for many years.  I call him Troy.  My new guy( in black)  seems to have more of an edge.  I don't have a name for the new guy but I do think they are brothers.

I think this guy is a darken version of this guy.  The hair and eyes are different but I think they are the same. 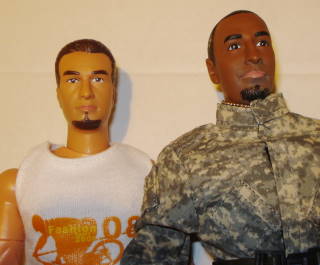 .  They don't have names or s story-line for them yet either.  I hope to do that soon.

This guy has a young face.  I think I am going to call him Gaffrey.  I have redressed him and have a story-line that I will share with you all soon. 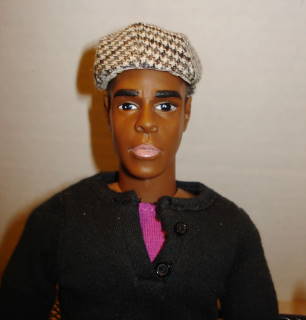 This guy looks similar too!

This guys (in the middle is my new guy) looks similar to the one which I already have but I purchase him anyway.  I think that they looked the same because they all look very confident look in the eyes.  Up close they do look different.

The on the right is Shaka.  He looks like the actor in the movie Shaka Zulu in the movie !  The other two don't have names or stories.