Video Of The Month!

I am going to have to find a replacement for my last Video Of The Month!  It
looks like the person removed it. 😩  I hope it wasn't because of me.  Anyway,
I saw these videos and just loved them!  So this is a triple play.  If you are a
person who has GI Joe and Action Man in your collection, then you might
really like these videos.

Warning these videos are long!  I would suggest you get a cup of tea and sit back.

Hey Gang!
Just some pictures of dolls I am dressing to see how they look!
What do you think? 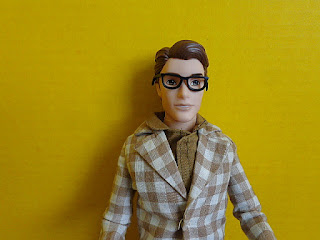 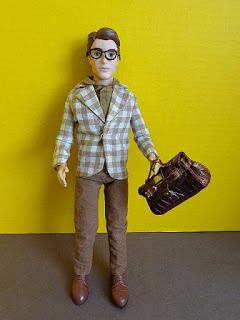 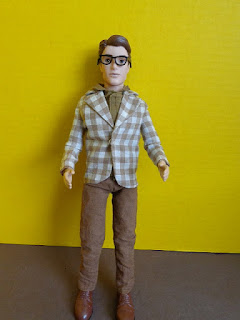 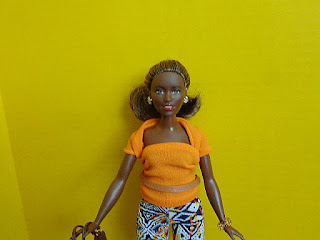 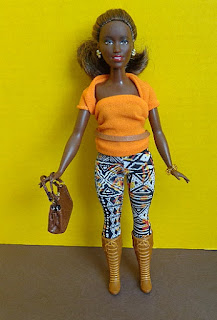 Going out for a date! 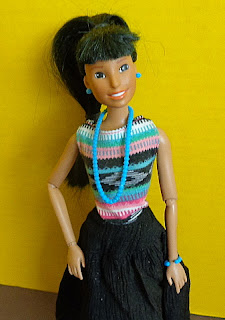 So I won't be disappearing for the Phila. Flower Show,which started yesterday,
like in past years!  I will be doing quick posts during the Flower Show!

I wanted to show you what I found at the thrift store for $2.50!

The Desert Patrol Vehicle (DPV), formerly called the Fast Attack Vehicle (FAV),
is a high-speed, lightly armored sandrail-like vehicle first used in combat during
the Gulf War in 1991. Due to their dash speed and off-road mobility, the DPVs
were used extensively during Operation Desert Storm. The first U.S. forces to
enter Kuwait City were United States Navy SEALs in DPVs. 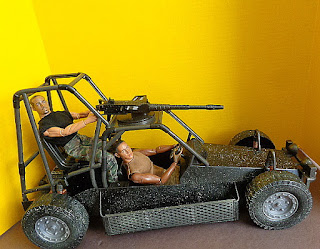 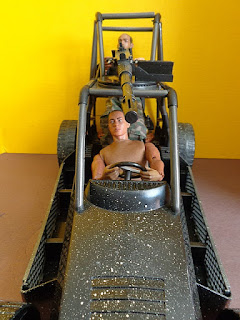 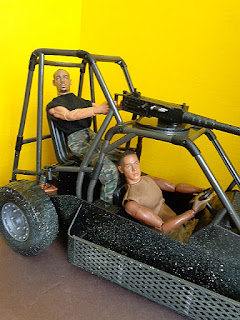 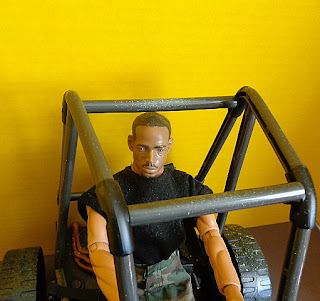 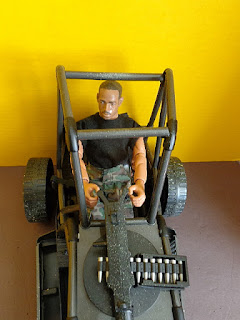 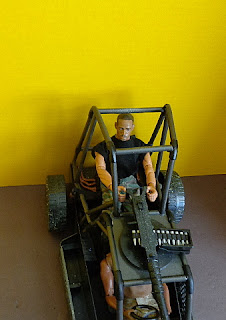 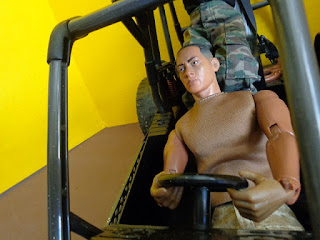 Etienne: I love this darn thing! 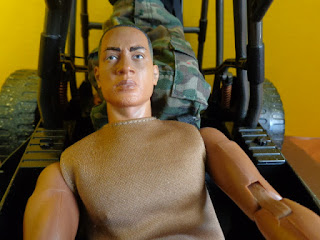 OK! Thanks For Looking!

So I was able to purchase Trek 50th Anniversary Lieutenant Uhura Doll!    I got
her just before Christmas.  I have shown her on Facebook but my blog is behind
on posts and photos.

I miss place my camera during the holidays! My dad passed and everything
went down from there!

I tried to take pictures of my doll in the box  with much glare! 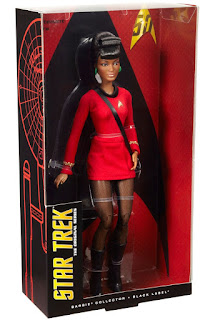 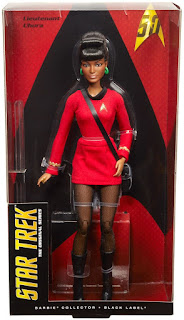 
I was so happy to get her I didn't take all the pictures of her I could have!
Then there was the camera thing!  Now... I have a camera on my tablet and that
is OK for Facebook but I think you guys and my blog deserve the better and
clearer pictures I can take with my camera! 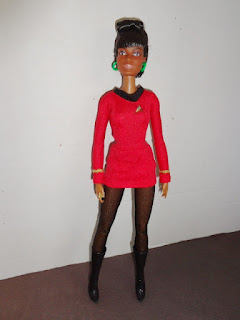 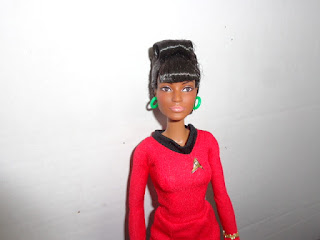 Many of us think that they did a good likeness of Nichelle Nichols!  No doll
company does it better than Mattel when they get it right!  There were a few
misses along the way but not many.  So this is me giving Mattel their props on
that! I did want to give a little info on the women!


Nichelle Nichols was born Grace Nichols on December 28, 1932 in Robbins, Illinois. She began her show business career at age 16 as a singer with Duke Ellington in a ballet she created for one of his compositions and later sang with his band. After switching to acting, she was twice nominated for the Sarah Siddons Award for best actress in "The Blacks" and "Kicks and Company". Her film debut found her dancing with Sammy Davis Jr. in Porgy and Bess (1959). A guest appearance on The Lieutenant (1963) led to an offer from Gene Roddenberry to join the cast of Star Trek (1966). Her best known role on the series is communications officer Lieutenant Nyota Uhura. She later repeated her role in a string of successful Star Trek films: Star Trek: The Motion Picture (1979), Star Trek II: The Wrath of Khan (1982), Star Trek III: The Search for Spock (1984), Star Trek IV: The Voyage Home (1986), Star Trek V: The Final Frontier (1989), and Star Trek VI: The Undiscovered Country (1991).

During the first year of the series, Nichols was tempted to leave the show, as she wanted to pursue a Broadway career; however, a conversation with Dr. Martin Luther King, Jr. changed her mind. She has said that King personally encouraged her to stay on the show, telling her that he was a big fan of Star Trek. He said she "could not give up" because she was playing a vital role model for black children and young women across the country, as well as for other children who would see blacks appearing as equals.

Invited to join the board of directors of the National Space Institute, NASA asked her to participate in its astronaut recruitment program for the space shuttle project. Three of her recruits were on the ill-fated Challenger mission. For her work, she received NASA's distinguished Public Service Award. She has a consultant firm, Women in Motion Inc. through which she produced and starred in the Smithsonian Institution's National Air and Space Museum film "What's in It for Me?". With all this, she has not neglected her singing making a series of video albums the latest being "Nichelle Nichols: Live at Disneyland".

A few other pictures that I took before the camera went missing.  I got this Sparkle
Girlz outfit for her.  It is actually two outfits!  One is the dress that she is wearing
as a top..... 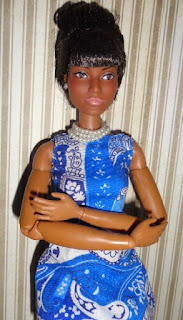 and the other is a pant and top.  I am just using the pants her because they match
the dress. 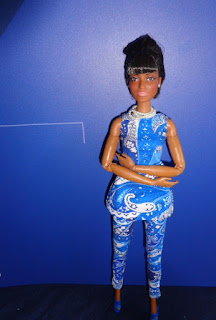 They look like something a women like her would wear. I traded out her green
earrings for pearls and added the triple strand necklace. The look is completed
with blue heels. 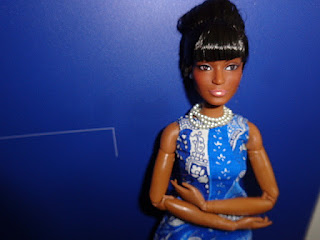 I posted her picture on Facebook.  I got some interesting comment about the doll.
I noticed that the complexion on the head was a little darker than the body too!
(face is more Kara body is more Grace) There isn't a made to move Kara body yet.
One thing that was pointed out was that the eyes on all of the dolls ...even in the
promo photos are a little... off.

OK, lets look!
One eye is slightly lighter than the other. 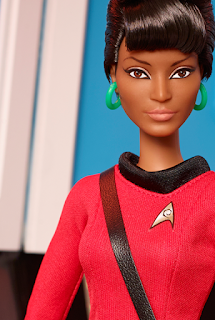 No it is not a shadow.  It is how they painted the eye. 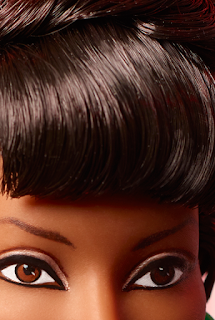 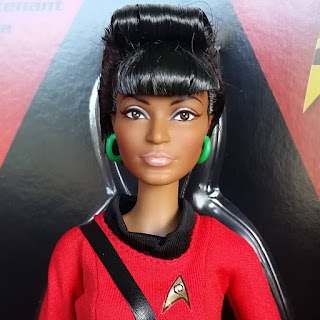 The position of the white dots in the eyes are not in the same place on the other
eye and can give a strange look in some photos.  I made some corrections in the
eyes of my doll above in the blue.  I really love the doll and wouldn't send it
back or anything but be prepared